That Kind of Hell

May 06, 2016
“I wouldn’t wish that hell on anybody,” confides the woman seated to my left at Tony Starlight’s Christmas show. We are strangers at a charity event and she is winding up the story about her daughter being a stepmother, not knowing that I am a stepmom.
What kind of hell is it that she wouldn’t wish?
The hell of knowing that if my husband ever decides he doesn’t want me, these children are lost to me, too.
It’s the hell of having my sister, absorbed in her divorce proceedings, tell me that she knows her soon to be ex-husband will probably have a girlfriend or wife again, but she can’t stand the thought of another woman pretending to mother her child.
It’s the hell of knowing that the only reason I’m present in this role, in the lives of my children, is because of a broken union.
The hell of going to pick up our oldest boy from high school for a doctor appointment and being refused at the main office because I’m not an “authorized person.” Maybe the stereotypical snippy lady working the counter didn’t say it quite the way my memory recalls it, but close enough: “It needs to be his real mom for us to release him, she’ll need to pick him up.” I turn away with cheeks aflame and bite my tongue until I can curse in the parking lot because, thanks to a few DUIs, his “real mom” is in the county jail for the next 10 months.
It’s the hell of knowing that when they need me most it’s because mommy has gone off the deep end again and is drowning in pills, wine, or her man.
It’s the hell of having missed whatever portion of their life it was that I missed – first cry, first smile, first word, first giggle, first step. For each of them, I’ve missed something important, essential, to who they are – the cracked skull, broken collarbone, lost teeth, pony rides, baseball games, and birthday cake smeared onto a happy toddler’s face.
The kind of hell of being absent at the moment of their conception; knowing it’s not and never will be the connection between my husband and me that sparked their lives.
It’s the hell of being on the inside until some invisible line is crossed and I’m suddenly on the outside.
It’s the hell of parenting with tenuous rights; of loving without much societal encouragement for that love to be given or returned.
The hell of knowing that another woman is out there hurting, must be hurting, because whenever her babies are with me they aren’t with her.
It’s the hell of brokenness, unmet expectations, disappointed hopes, and dreams that didn’t work out the way any of us thought they should.
Its fires are stoked by the idea that there are those who manage in some way to be exempt from its misery because their family is just perfect enough.
This kind of hell torments with the perception that stepmotherhood is an aberration, rather than a most common and timeless experience.
It blazes because we forget that all families are forged new, over and over with every entry and departure. We wade into its fiery ache by way of our strange attachment to seeing stepfamily love as intrusive, unnatural, and unlikely.
Reminiscing over my childhood scrapbook, I study the heights and weights my mother recorded for me when I was Little One’s age. I note that my measurements at age 10 equal hers at age 12 and am initially surprised and curious there is such a difference in our growth. Bewildered pain cracks my heart. My brain apprehends that the comparison I’ve been making between her body and mine is irrelevant. Abruptly, I remember that I will find no clues to her development in my genetic past because, she is not mine.
I fall into an abyss of meaninglessness and grasp, confused, for some fixed connection. I flail about to grab a solid thread that will tether us together forever. Blinded by my own fixation with the ugliness I see in the preface “step” and the separation I allow it to create, I find nothing. Accepting the pretense that suffering in love can be differentiated and ranked, sorted by blood or water, I am complicit in making this hell.
Out of cowardice, shame, or discretion, I admit nothing to the holiday party chinwagger. I don’t disclaim the five kids I’d mentioned earlier as “ours” when making introductions. I don’t confess my own “step” title. I don’t acknowledge that this kind of hell has been wished upon me. I allow her to think that my body has nobly borne five beautiful babes with the handsome father seated on my right. Offering a polite, solicitous smile, I remain silent.

(This piece was read at Listen to Your Mother - Portland 2016: http://listentoyourmothershow.com/portland/) 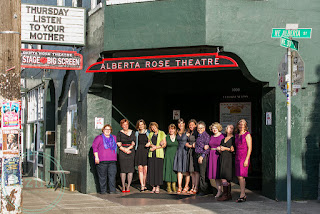 Popular posts from this blog

The Pinnacle of Divorce

June 08, 2017
There’s a perception I’ve heard presented as scientifically confirmed reality: Stepfamilies are becoming more and more prevalent because of escalating divorce rates, which are caused by society not valuing marriage enough. As if our cavalier attitude toward commitment and our apparent disregard for the sanctity of marriage is resulting in the downfall of so many unions. We all just split up and leave because it’s so easy to do and no one seems to mind. What I’d like to consider is the possibility that divorce, if it is in fact more prevalent, may be so rampant because we value marriage too much. We are a society that idolizes marriage and pushes it as the optimal relationship status. Everybody ought to be married, women sooner than men. Everybody must be married before they have sex (but, as an aside, we understand – just don’t make it obvious). Yes, no sex before marriage, unless you get yourself pregnant (you woman, you spontaneous self-fertilizer; you man stuck with a woman wh
Read more

January 25, 2018
When life seems disordered and you believe you can’t handle it; when you are tempted to dismiss writing as an alternative and deny that you are an artist: May you rest in the order of chaos and the design of the Universe. May you own your identity as a writer, independent of whatever else you may do and whoever else you may think you are. May you be bold and open in creating space to write and unashamed in asserting that writing is important to you. May you respect yourself as a writer and find it natural and comfortable to step away, from family, friends, work, the house, and write. May you honor the process; the concentration, energy, quiet yet fervent activity that goes into catching your ideas in words and pinning them to the paper. May you be unapologetic, feel no need to answer questions, in fact be absolutely blind to any idea of doubt about whether, when, and why you write. May you rejoice in this private wo
Read more

June 22, 2017
If we said the right words, everything would turn out alright, of course. If we spoke to one another just so, neither of us would hurt. Disappointment noisy as air escaping an untied balloon that, up until the wrong word seeped out, had been stretched thin and round, its breath held by pinched fingers. This is the trouble with being seen. When his words prick me, the sting flashes across face. I turn away quickly, hoping he won’t see the defeat in my eyes. I search for the right words and perhaps even find them, but speak in my taut, brittle voice and he can hear me cracking inside. He knows, he sees instantly I’m disheartened by his response. I take a step sideways and search for angles of escape, some distraction that will avert conflict and allow me to scurry away before I fall apart. My falling apart takes many forms; some are self-defeating, some self-abusing, and some pure rage. A falling apart in stages, really. Once we’ve used the wrong words, the right ones go into hid
Read more

Becky Rude
I am a woman, a wife, a mother to five stepchildren, a lawyer, and a writer. I am learning that we are all expressions of the Divine.